Seiðr is the core of Nordic shamanism, it is ancient and has its origins with the Vanirs, our ancient gods of life and procreation. In the Ynglinga saga (based on Yngligatal attributed to the Norwegian 9th-century skald Þjóðólfr of Hvinir) Snorri Sturluson writes :
“Freya was Njord’s daughter. She was the goddess of blót (sacrifice). She was the first to teach the Æsir how to seiðr. Seiðr was common among the Vanirs. ”
The principal period of the seiðr was thus before and in connection with the Æsir gaining a foothold in Sweden. What we can find in written sources about seiðr is from about 800–1200 CE, recorded at least a couple of thousand years after the principal period of seiðr. Furthemore Christianity had begun to spread here, which of course also affects how seiðr is described in these, compared to seiðr, very modern writings.
If we compare with now living shamanic cultures, we can assume that seiðr, where the völva (Old Norse term for female shaman who performs seiðr) traveled into the web, looked into the hidden and with the help of the Powers shaped it, was a rather common ritual.
In the mid-seventies, a small group in Stockholm began to explore seiðr as a shamanic ritual and during the eighties, modern seiðr developed as it is practiced today. In her doctoral dissertation Shamanic Performances on the Urban Scene, Galina Lindquist describes that process:
“… The sources of material and inspiration for the creative people were the works of social science: anthropology, folklore studies, comparative religion, archaeology, history. The knowledge these scientific disciplines have accumulated was reappropriated to construct entirely new practices, which were initially disembedded. ”
In Nordisk Hedendom (Nordic Paganism), researcher Folke Ström writes:
“ Seiðr is a far more complicated magical act than pure “tankemagi” (thought magic). Its psychological prerequisites, however, are the same: Seiðr magic is based on the notion of the soul’s ability to affect from a distance, its potential ability to free itself from the body and, in a materialized form, put the agent’s intention and will into action.
A not insignificant magical apparatus was required to conduct the seiðr. It also required a developed technique, based on purely professional skill and experience. It was consequently practiced by people well-experienced and educated in the art, men or women. Women are most often referred to as practitioners of the art of seiðr… ”

There are not really that many objects I have when I am a völva in a seiðr ritual. Cloak, hood, cat skin and of course the seiðr staff. And the only thing really important is the seiðr staff. A seiðr staff is extremely close and personal. You create it based on the experiences and encounters you get when you journey as völva in seiðr rituals. You make it by putting on symbols and objects associated to those encounters.
My seiðr staff is my close relative, me and the staff share blood and it carries my seiðr-associated magical objects. Only I can use it. The staff itself symbolizes the world tree Yggdrasil and when the völva journeys in a seiðr ritual the staff becomes Yggdrasil and it is along the trunk of the world tree that the völva travels to the other worlds.
I also have a seiðr staff “on loan”. It was made by participants in one of my workshops who were going to try to journey in a seiðr ritual. Before its debut as a seiðr staff, the participants provided it with a feather, a symbol for the ability to fly, as well as the ken rune for fire and passion and the birch rune that stand for female fertility.
Later, the staff was exhibited at Hemslöjden. Before the exhibition, I continued to build on the staff in much the same way as you create your personal staff, but instead of personal power objects obtained during journeys in the other worlds, I used things that are generally associated with seiðr. It is partially red, which symbolizes the blood, our substance of life and what all female mammals sacrifice for the continuance of life. I also carved a rune, lagu, the rune of the water connected to the Vanirs thereby connecting the staff to Freya. In addition to the feather that was put there originally I added two falcon feathers also associated with Freya who sometimes shape-shifts into a falcon. In addition, it has an owl feather, for acuity and clarity, and because the owl is associated with goddesses in many cultures, including our own Great Mother - Omma. I also painted a snake that winds around the staff. The serpent is a goddess attribute and symbolizes wisdom. Here the snake is blue, Freya’s color.

Seiðr has a deep impact

As völva I sit with my seiðr staff on a “sejdhjälle” (something that is elevated and used specifically to seiðr). Freya is the goddess of seiðr and therefore the völva has a leather cap and a cat skin (cat and sow are Freya’s animals) pulled down over her head. The group that wants to gain knowledge stands around the völva and sings special power songs - vardlokkur - while the völva in ecstasy rides on her staff into the other worlds and there gains knowledge or sends power. 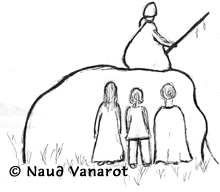 When the circle is created and the powers of the four directions - earth, air, fire and water - are summoned. When the group that participates in the seiðr holds the energy and the presence of the Powers is felt. When the energy thickens. When the group sings the “vardlokkur”, that I as völva have chosen, over and over again. When I, in ecstasy, ride my staff. When the staff is filled with energy and megin (in Old English mægencræft) . When the group, the surroundings and the “vardlokkur” disappears and there is only me and my staff in the web, in the other worlds. To meet Freya and Odin and maybe Urd when she spins our threads of life and to be allowed to see what she is spinning. When I, as völva, send the energy towards the chosen goal. Or when I, as völva, get visions based on the questions people ask.
To be called back to this world, to once again find myself on the “sejdhjälle”, in the world of humans. Still a bit confused and full of images flowing through me. That’s how seiðr is for me.
When working shamanically, it is not really very important to use the “right” symbol or object because what is used becomes what it needs to be by being charged. In our physical world, the seiðr staff “on loan” has no blood on it, but when it is used to seiðr, the red color is no longer a symbol of blood but is then transformed into the blood the staff and the völva needs. And really, when you are experienced enough, I think you can actually travel without any other help than your own megin and a vardlokkur.

To my knowledge, there are no ancient vardlokkurs written down, so those used have “come” to people when they’ve traveled in trance or ecstasy into the other worlds. One of my favorite vardlokkur is one where the women begin and sing a stanza with their own lyrics and melody and the men start singing their stanza and melody when the women have sung half theirs.
The women:
Where the paths cross on the earthbound stone
I’m sitting alone when the Ancient arrives.
The men:
Seiðr staff, magic findings
I see far and wide in every world.

The song sounds at dusk, when night falls. From an old knowledge and power that we can only imagine but not really know much about, a new opportunity, a new possibility is created.